Intermittent sand filters were identified as being a very good option in areas where centralized wastewater service is not available, and where site conditions necessitate providing at least secondary treatment and pathogen reduction to regulated limits.  Sand filters have been used for centuries to treat water, and designs and construction methods have been increasingly improved upon such that they can consistently produce a very high quality of effluent.  Intermittent sand filters require significantly less routine maintenance and tend to perform more reliably than other commonly used treatment options where secondary or higher levels of treatment are needed.

A properly designed and constructed system intermittent sand filter is capable of reliably producing an effluent with low levels of BOD5 and TSS, and excellent NH3 reduction (nitrification).  Average BOD5 and TSS levels are typically less than 10 mg/L (and usually approximately 5 mg/L).  NH3 levels are typically on average less than 1 mg/L, and average fecal coliform levels less than 200 CFU/100 ml.  A conceptual illustration of the sand filter treatment systems monitored as a part of this project is provided below, along with photos of one of those systems. 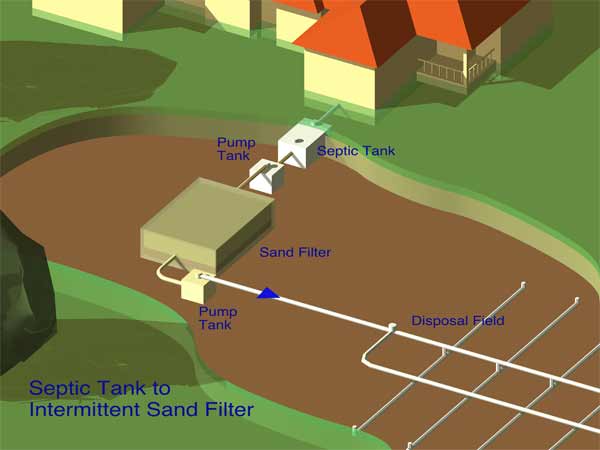 Raw wastewater receives primary treatment by the septic tank.  Septic tank effluent is then dosed onto the sand filter, from which effluent drains to another pump tank.  This second pump tank doses the subsurface dispersal field.

Here is the sand filter system after completion.  Barely visible below the wall on the left side of the photo is the green riser lid over the pump tank to which treated effluent drains from the filter, and from which effluent is pumped to the low-pressure dosed subsurface dispersal field. 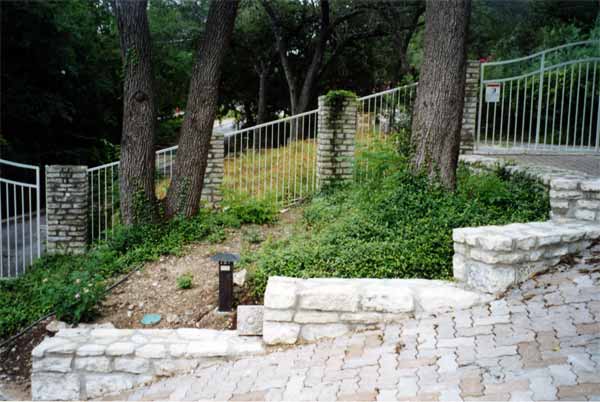 Most of the low-pressure dispersal field was located in this area between two driveways. 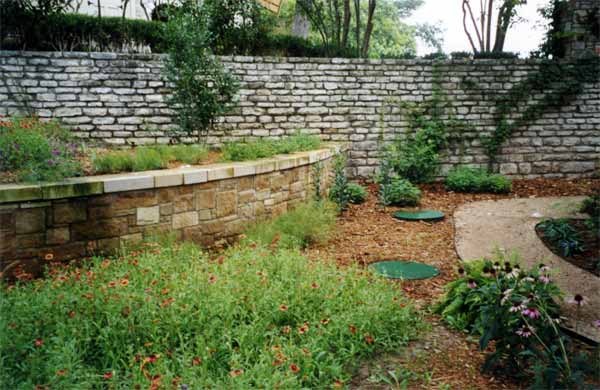 This photo shows two green watertight, bolt-down tank riser lids located over the septic tank and the pump tank that doses the sand filter.  The importance of designing and construction systems such that there is easy access for routine inspection, maintenance, and servicing as needed cannot be over-emphasized.  Substantial costs for locating system components and replacing landscaping can be avoided with these simple measures.

The system was monitored for over two years, with average TSS and BOD5 levels of 6.5 mg/L and 5.8 mg/L, respectively (34 samples collected).  Average fecal coliform levels for that same period were 87 Col./100 ml. 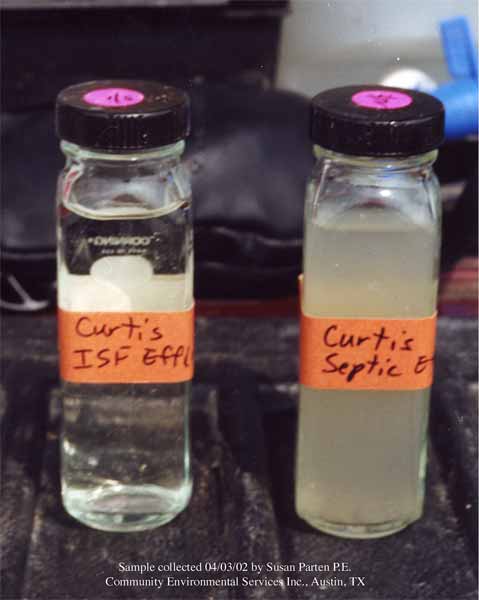 CES was contacted by the owner of a residential rental property located along a steep bluff overlooking one of the hill country lakes in central Texas.  The owner was referred by another engineer who is familiar with CES work on other decentralized wastewater service projects.  The property owner was informed by the local regulatory authority that the system must be replaced, and was interested in having a new system installed that would (1) meet the applicable regulatory requirements, (2) perform reliably with very low on-going maintenance requirements, and (3) would be cost-efficient as compared with other options.  The site conditions at this residence were particularly challenging, given the shallow soil depth overlying hard limestone and adjacent to a sensitive watershed.  In addition, the lot was relatively small with a steep drop off along the bluff behind the house in the direction of the lake, and only a small front yard.  Below is a photo which shows the shallow soil depth and hard layer of limestone in the front yard. 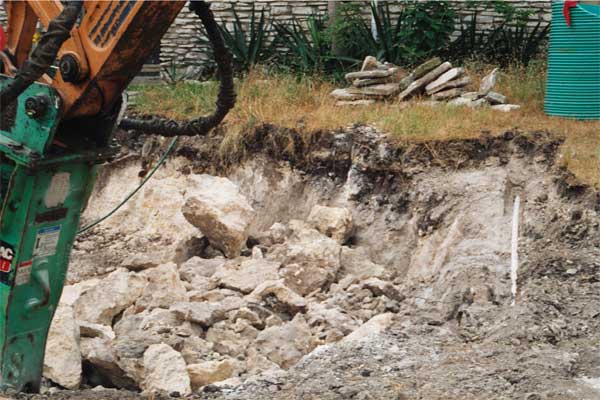 It was determined based on a site evaluation and survey of the site that an intermittent sand filter treatment system would provide the necessary level of treatment to satisfy local environmental and regulatory requirements, and would meet the other criteria requested by the property owner.  Intermittent sand filters, when properly designed and constructed, consistently provide a very high quality of effluent and require very low levels of on-going maintenance as compared with other secondary treatment options.  They can also provide for natural pathogen reduction where a subsurface method of effluent dispersal is to be used (further disinfection is needed where surface irrigation is to be used), which avoids the use of chlorination of effluent and associated environmental health issues with chlorinated organics.  The photo below shows the treated effluent sampled from this type of system.  The effluent is clear and comparable and relatively odorless, with only a faint soil/sand odor. 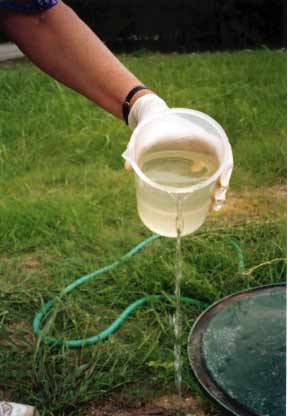 A topographical survey was performed for the site, and design plans and details prepared by CES for the system.  The overall system consists of septic tank pretreatment, followed by intermittent sand filtration, with subsurface soil dispersal of the treated effluent in a low-pressure dosed system. 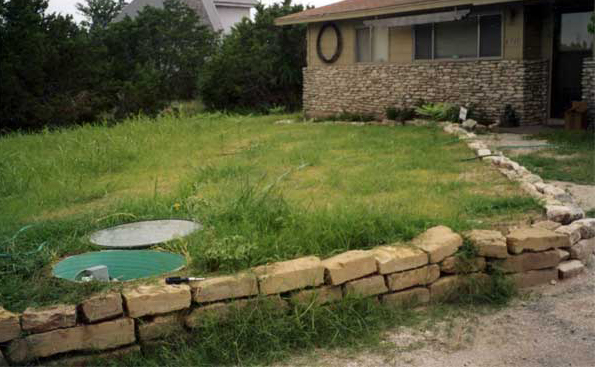 The above photo shows the completed sand filter and low pressure dosed system after the system had been operating for some time.  The watertight lid is off of the field dosing tank in this photo.  Special bolts are used to close the watertight lids that help to prevent unauthorized access to the various parts of the system.  Following completion of construction the system was monitored for just over a year, with average TSS and BOD5 levels of 3.5 mg/L and 2.6 mg/L, respectively (15 samples collected).  Average fecal coliform levels for that same period were 137 Col./100 ml.